Large Fragment Knockin (up to 300kb)

The biopharmaceutical industry is in a critical period of innovation and transformation, with rapid developments due, in part, to evolving research tools and techniques. As an important research tool in the process of scientific research verification and preclinical drug development, genetically modified model animals can greatly improve the success rate of drug development and save a lot of translational research costs. However, the mouse biological system is not completely consistent with that of humans, especially shown in the immune system differences. Given that many human pathogenic factors and drugs are germline-specific, it is particularly important to establish an effective humanized mouse model for the pathogenic process studied.

TurboKnockout-Pro gene editing technology innovatively combines TurboKnockout® technology independently developed by Cyagen with BAC recombination technology for improved technological capabilities. Due to the limitation of the capacity of DNA cloning vectors, the exogenous gene fragments used to make genetically modified animals are usually less than 30kb, so some important elements that regulate gene activity are inevitably lost. However, BAC can accommodate foreign DNA up to 300kb. Through BAC recombination, longer fragments of genes and regulatory sequences can be introduced, so as to be closer to the expression pattern of endogenous genes and retain a greater degree of genetic humanization.

Compared with traditional ES cell gene targeting technology, TurboKnockout-Pro not only has the advantages of accurate modification and stable integration effect, but also can greatly shorten the project cycle by realizing multi-step BAC recombination at the ES level. Compared with CRISPR/Cas9 technology, TurboKnockout-Pro technology has no off-target effects and no patent disputes, providing freedom to operate. For these reasons, it is a commonly used technology for new drug research and development projects.

The expression of gene products seen in human disease is not always as high as a transgene, but it should still express to an extent, unlike the non-expression seen in a gene knockout. In many cases, the occurrence of genetic diseases is due to the change of protein structure caused by the mutation of single or several nucleotide bases, which is manifested as abnormal protein activation or inhibition. Therefore, constructing precise gene mutation models that are refined to characterize disease has become the best solution for effective preclinical and translational research. When the human gene under study has a high homology with the mouse gene homologous sequence, it can be simulated by directly making a point mutation mouse model. When the sequence homology between human and mouse is low, it is necessary to make humanized mice with mutations to better mimic human disease phenotypes. In the gene therapy research strategy, the causative gene(s) are found by genomics or proteomics, then combined with the humanized point mutation mouse model for verification, and this has led to many breakthrough discoveries and high-impact publications. 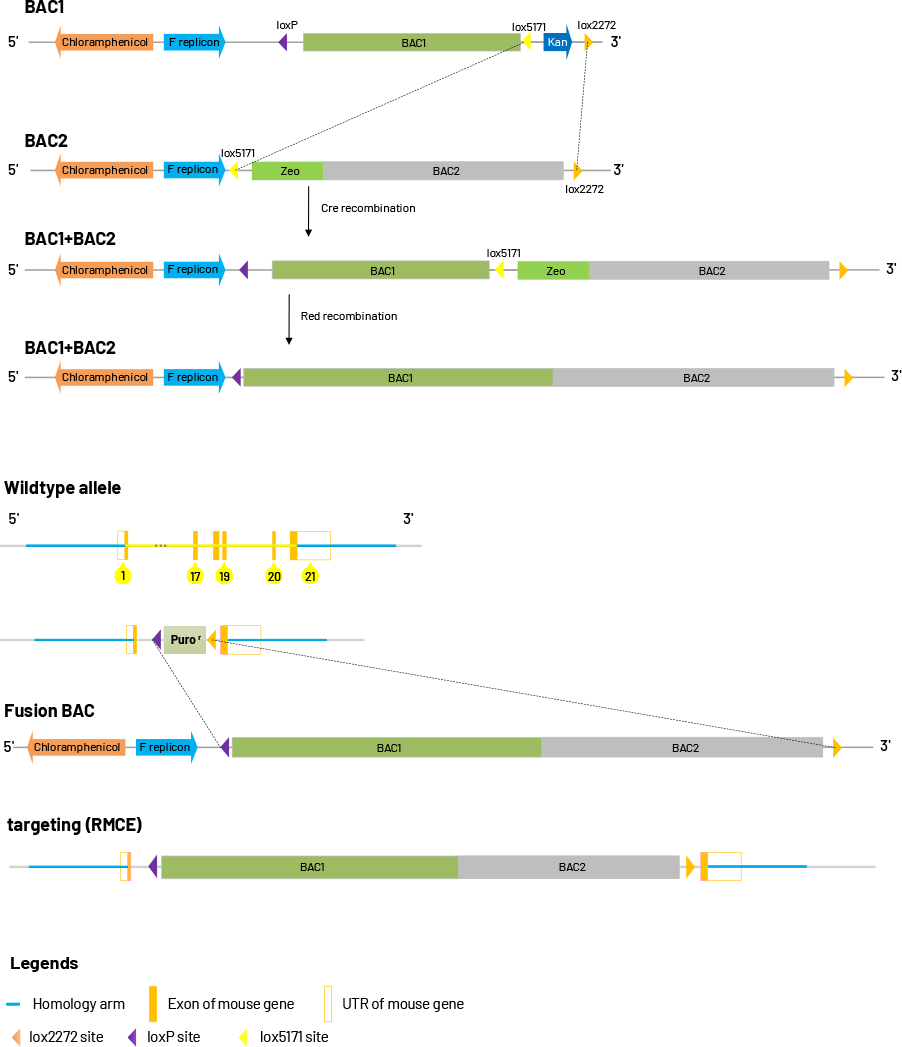 No off-target effects, accurate modification, shorter turnaround
TurboKnockout-Pro gene editing technology is built on the traditional ES cell gene technology. It not only has the advantages of accurate modification and stable integration effect, but also generates 100% ESC-derived founder mice, rather than chimeras, and uses a self-deleting selection cassette to reduce two generations breeding time, providing founders in as fast as 6 months. At the same time, TurboKnockout® can perform multi-step BAC recombination at the ES level, which can further shorten the experimental period for complex genetic modifications.

Freedom to operate
Compared with CRISPR/Cas9 technology, TurboKnockout-Pro technology is free from patent disputes and is a commonly used technology for new drug research and development projects.

Professional technical support
Our professional project management team will balance speed, quality, and price according to your preferences or project needs, design the experimental plan for you attentively, and provide timely project reports and after-sales service.

In this Webinar, you will learn:
>> Register Now
About Cyagen

With over 15 years of experiences, Cyagen provides comprehensive in vitro and in vivo research model services for the basic and preclinical research stages of Gene & Cell Therapy (GCT) drug development. We can provide cell models and animal models that regulate the expression of target genes, as well as a series of related services, such as phenotyping, functional verification, pathological analysis and more. We have an experienced team of experts and a mature technology platform, with customers in dozens of countries and regions around the world. Our experts are ready to work with you to find the best plan for your goals.