Gene therapy introduces a modified gene into diseased cells to treat a genetic-based disease. The new gene usually contains a functioning gene to correct the effects of a disease-causing mutation, which may be either spontaneous or inherited. In the past few decades, gene therapy has made significant progress in the treatment of genetic diseases. In practice, scientists apply genomic and proteomic methods to identify the disease-causing gene, subsequently verifying the target gene with in vitro and in vivo experiments. With this methodology, scientists have published many high-impact gene therapy research articles.

Over the last decade, Cyagen has delivered hundreds of genetically modified animal models and virus packaging services to researchers for gene therapy applications. By the end of 2020, Cyagen’s products and services have been cited in over 4,750 publications across highly reputed peer-reviewed journals, such as Nature, Cell, Science, and more. With our expertise, Cyagen provides guaranteed genetically engineered animal models and viral packaging services for gene therapy research. The use of such models are known to improve clinical transformation of gene therapy.

If you have questions about choosing the right animal models for gene therapy research, please contact at 86 20-31601779 or email service-apac@cyagen.com for complimentary support, consultations, and project strategy design.

Gene therapies are powerful research tools which deliver nucleic acids into diseased cells to directly treat illness – these are also being tested in human clinical trials for a range of applications. A thorough understanding of the currently available gene therapy methods is critical for successfully developing new gene therapy strategies and projects. Herein, we will discuss 4 gene therapy strategies: gene augmentation, gene silencing/inhibition, genome editing and gene suicide. (Since gene suicide is mainly used to destroy tumor cells with an oncolytic virus, this page will not explore this topic in detail.)

Gene augmentation therapy is used to treat diseases caused by loss-of-function mutations, which prevent the gene from producing a functional product. This gene therapy technique introduces DNA containing a functional version of the lost gene into the cell and aims to produce a functioning product at sufficient levels to replace the protein that was originally missing.

Gene augmentation therapy is the most common treatment option for spinal muscular atrophy (SMA). SMA is caused by a deficiency of a motor neuron protein called SMN1, so the basic concept of gene therapy treatment is to insert the normal SMN1 gene into the diseased cell. Importantly, vector AAV9 can deliver cDNA of SMN1 gene to the cells. The first gene therapy treatment for SMA was approved by the Food and Drug Administration (FDA) in 2019. Despite being an effective option to minimize the progression of SMA and improve survival, this treatment is costly. At present, the commonly used strategies of gene augmentation therapies include delivering of a new protein-coding gene, increasing the expression of growth factors and cytokines, as well as cellular cytokines and autophagy activation of the diseased protein.

If the mutation fragment length of the diseased gene is too large for the vector, one solution is to adopt alternative splicing. The alternative splicing method has achieved great success in Duchenne Muscular Dystrophy (DMD) treatment. Scientists have used antisense oligonucleotides (ASOs) to interfere with the translation of protein mRNA, preventing the mutant exons from being translated, and thereby avoiding the loss of protein function caused by disease-causing nonsense and frameshift mutations.

In cases where the addition of a functional gene does not resolve the disease phenotype, gene silencing therapy may be used to shut down (silence) the expression of an abnormal gene. For diseases caused by dominantly inherited disorders, just one abnormal allele can manifest the disease phenotype and related dysfunctionality of cells or organs. A common example is the constitutive expression of oncogene mutations in tumor cells, which requires gene therapy to inhibit the function and expression of pathogenic genes. RNA interference (RNAi) therapy has been applied in research across many polyglutamine (PolyQ)-related diseases, including Huntington’s disease (HD) and spinocerebellar ataxias (SCAs), with the aim to reduce the expression of toxic proteins. Although single-stranded ASOs can mediate gene silencing – small/short interfering RNA (siRNA), short hairpin RNA (shRNA), and microRNA (miRNA) therapies typically provide stronger inhibitory function and durability. 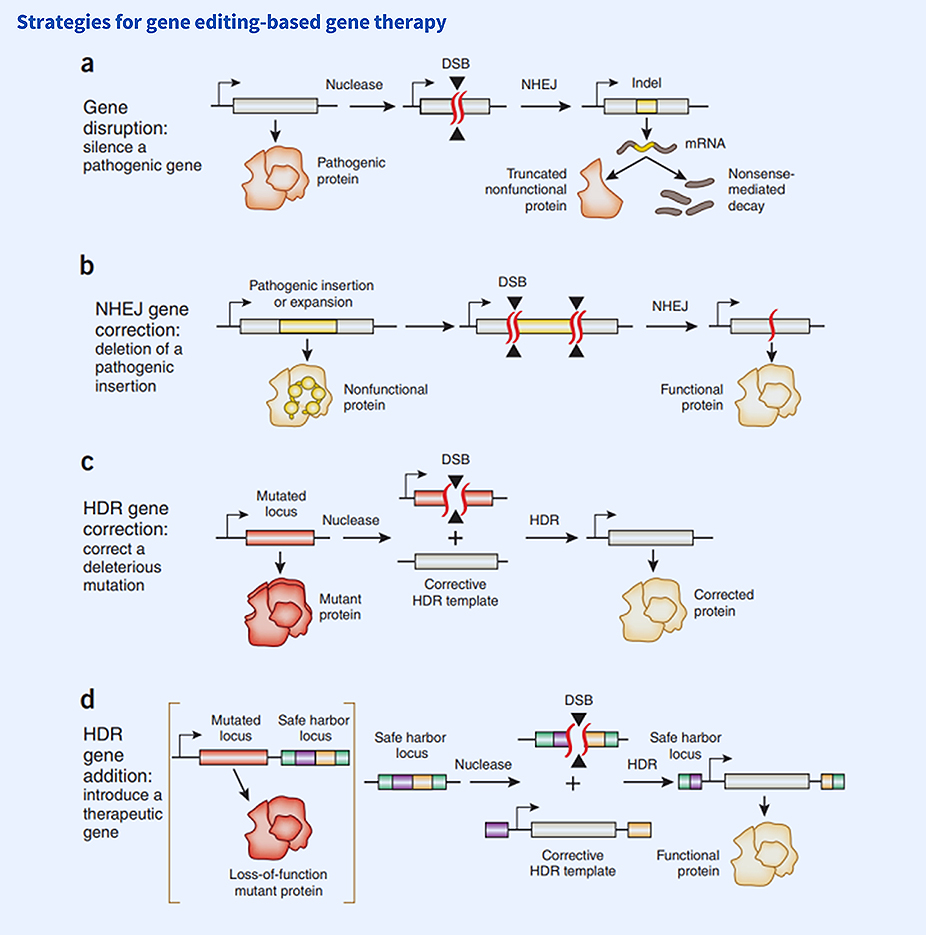 More than 80% of rare diseases are caused by genetic disorders. With the development of a gene therapy for a rare disease, it can provide hope of a one-time treatment for numerous rare diseases that currently have no specific therapeutic options.

In under 15 years since its founding, Cyagen has become a leading provider of custom mouse and rat models – delivering over 78,400 models to researchers worldwide and receiving over 4,800 peer-reviewed citations. Cyagen prides itself on its premium customer service: including price-matching, client access to complimentary technical consultations, full confidentiality, and a 100% money-back service guarantee.

2. Both in vivo (animal) or in vitro (cell) experimental models available

If you are engaged with or interested in gene therapy research, Cyagen's experts can provide you with in-depth technical support and discuss your project plans. We also provide customize model generation strategies, helping develop your gene therapy research and publish high-impact articles.

From strategy design through to delivery of research-ready custom models, Cyagen offers complete outsourcing for all your animal model needs. We can create any custom mouse or rat model with guaranteed genotype validation, even offering phenotypic characterization and other downstream services required to establish a rare disease model. Our expansive range of products and services include:

Search for your gene of interest >>

Germ-Free Animal Platform
Cyagen has introduced a complete range of germ-free (GF) animal husbandry and testing programs from our partner and leading provider of research models, Taconic Biosciences. Together, we have assembled an excellent germ-free (GF) animal technical team and established a standardized sterile animal feeding and breeding detection technology system. We can provide customers with germ-free (GF) mouse technical services that meet a wide variety of SPF standards as well as after-sales and training services. Learn more >>