Parkinson's disease (PD) is a neurodegenerative disorder that predominantly affects dopamine-producing (“dopaminergic”) neurons in a specific area of the brain, called the substantia nigra.The Centers for Disease Control and Prevention (CDC) rated complications from PD as the 14th leading cause of death in the United States. Herein, we analyze the disease code from a genetic point of view, current scientific research developments, and disease models used to expand our understanding of the illness and improve human health. In our Weekly Gene articles, Cyagen will explore the relationship between diseases and genes with you. 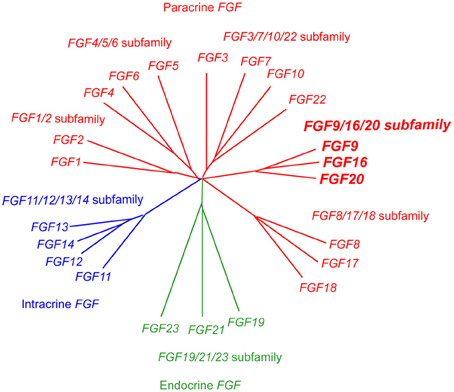 Figure 1. Evolutionary relationships within the human FGF gene family by phylogenetic analysis. Phylogenetic analysis suggests that 22 FGF genes can be arranged into seven subfamilies containing two to four members each. Branch lengths are proportional to the evolutionary distance between each gene[2].

Function of the FGF20 Gene

The protein encoded by the FGF20 gene is a member of the fibroblast growth factor (FGF) family. The fibroblast growth factors possess broad mitogenic and cell survival activities, and are involved in a variety of biological processes including embryonic development, cell growth, morphogenesis, tissue repair, tumor growth and invasion. This gene product is a secreted neurotrophic factor but lacks a typical signal peptide. It is expressed in the normal brain, particularly the cerebellum, and may regulate central nervous system development and function. Homodimerization of this protein was shown to regulate its receptor binding activity and concentration gradient in the extracellular matrix. Genetic variations of this gene have been associated with susceptibility to Parkinson disease (PD). 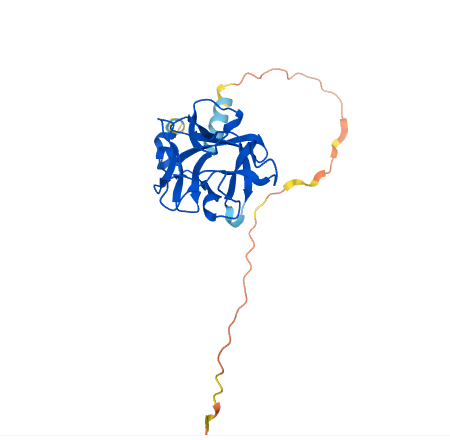 Disorders Related to the FGF20 Gene

Parkinson's disease is a common neurodegenerative disorder that occurs when nerve cells in the brain don't produce enough of a brain chemical called dopamine. Sometimes it is genetic-based and inheritable, but most cases do not seem to run in families. Exposure to chemicals in the environment might play a role. Symptoms begin gradually, often on one side of the body, affecting both sides as the disease progresses. Symptoms include: trembling of hands, arms, legs, jaw and face; stiffness of the arms, legs and trunk; slowness of movement; poor balance and coordination. As symptoms get worse, people with the disease may have trouble walking, talking, or doing simple tasks. They may also have problems such as depression, sleep problems, or trouble chewing, swallowing, or speaking. There is no specific test for PD, so it can be difficult to diagnose. Doctors use a medical history and a neurological examination for diagnosis. PD usually begins around age 60, but it can start earlier, and it is more common in men than in women. There is no cure for PD, but a variety of medicines sometimes help symptoms dramatically. Additionally, Surgery and deep brain stimulation (DBS) can help severe cases. With DBS, electrodes are surgically implanted in the brain to send electrical pulses to stimulate the parts of the brain that control movement. The inability to control movement in patients with this disease has been attributed to the severe loss of dopaminergic neurons within the substantia nigra. Environmental and genetic sources act together in the disease cascade. FGF20 has been mapped to 8p21.3–8p22, which is within an area of Parkinson's disease linkage. It means that the gene FGF20 is related to Parkinson's disease.

The latest research has identified a series of rare variants in SYT11, FGF20 and GCH1 associated with Parkinson’s disease, after Bonferroni correction. Human embryonic stem cells (hESCs) are a potential source of dopaminergic neurons for treatment of patients with Parkinson’s disease (PD). Genome-wide association studies (GWAS) have identified numerous loci associated with Parkinson's disease. They aimed to perform a comprehensive analysis of selected genes to determine the potential role of rare and common genetic variants within these loci, and fully sequenced 32 genes from 25 loci previously associated with Parkinson's disease in 2657 patients and 3647 controls from three cohorts.The association of FGF20 was driven by a rare 5' UTR variant (rs1034608171) located in the promoter region. These results further demonstrate the importance of fine mapping of GWAS loci, and suggest that SYT11, FGF20, and potentially PM20D1, BST1 and GPNMB should be considered for future studies as possible Parkinson's disease-related genes[6].

To Be Continued: Mouse Models of Fgf20

In the next article, we will update you on the applications of mouse models used for Fgf20 gene studies and new research progress.

HNRNPC Mouse Models and New Research Progress
The "Culprit" Of the Rare Diseases MCTD/OPMD - HNRNPC
A Gene Related to Excitement- GRIA3
NLRP3 and Familial Cold Autoinflammatory Syndrome
We use cookies to ensure that we give you the best experience on our website. To learn about how we keep your information safe, view our Privacy Policy. OK Privacy policy