What Are Transgenic Rats

Transgenic rats are animal models which have foreign DNA incorporated into the rat genome and are used to research a wide range of gene functions and human diseases.

In this article, we review the basic information on transgenic rat models, research application examples, and how they can be developed.

What are Transgenic Rats Used For?

Transgenic rats are the first choice of pharmacology research animals, which are widely used in the study of cardiovasology, oncology, diabetes, breast cancer, and neurological diseases. Transgenic rats can simulate human diseases which can help researchers discover pathogenic genes of the diseases and gain a better understanding of the relationship between genes and their environment that may ultimately affect human health. Transgenic rats have been widely used in testing the efficacy and safety of drugs, which has accelerated the drug screening efficiency and accuracy.

How Are Transgenic Rats Generated?

How Does the PiggyBac Transposon System Work?

The PiggyBac (PB) transposon system utilizes a unique "cut and paste" mechanism to transfer DNA fragments between vectors and chromosomes, effectively mediating the integration of foreign DNA fragments into the genome. Upon transposition, transposases efficiently recognize specific transposon sequences (inverted terminal repeats, ITRs), binding to the transposon ends to form a transient hairpin structure that disengages after “cut” and “pastes” to the TTAA site of the genome. Our experimental data indicates that the PiggyBac system yields more than 2 times the positive gene expression rate in offspring, as compared to conventional plasmid DNA microinjection. 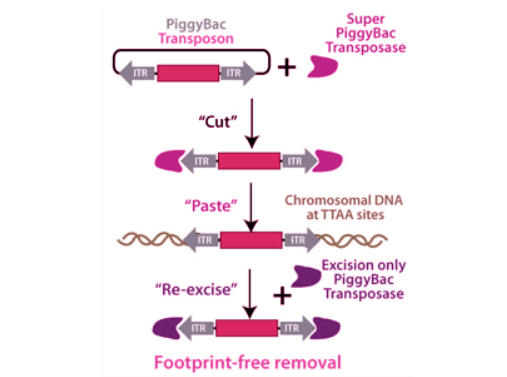 Our proprietary PiggyBac transgenic method has the following advantages over other transgenic approaches:

Cyagen provides comprehensive model generation services for all your transgenic mouse, mouse embryo, and rat model needs. Contact us to perform your entire project - from initial strategy design and DNA vector construction, all the way through breeding – we deliver research-ready transgenic rodent models for guaranteed results.

How to Effectively Generate CRISPR Gene Knockout Cell Lines? Choosing a Transfection Method
Advancing Research with Humanized Mouse Models
What is a Knockin Mouse?
Animal Models for Metabolic Disease Research
We use cookies to ensure that we give you the best experience on our website. To learn about how we keep your information safe, view our Privacy Policy. OK Privacy policy