Humans are estimated to have upwards of 20,000 protein-coding genes, each of which plays a unique functional role in our biology. Considering the various mutations that may be present across genetic loci alongside the interplay of these factors, it may quickly become an overwhelming topic to review. To support researchers looking for regular information on genetic targets of interest, we have developed our Weekly Gene series to introduce the development trend and future direction of research across human genes. Cyagen' s Weekly Gene series provides insights into popularly researched genes, their basic information, research overview, and application background of the gene in detail.  This week' s gene we focus on the urotensin II-encoding gene, UTS2.

Urotensin II (UTS2/UII) is a potent vasoconstrictor peptide, which signals through a G-protein coupled receptor (GPCR) known as GPR14 or urotensin receptor (UTR). UTS2 exerts a broad spectrum of actions in several systems such as vascular cell, heart muscle or pancreas, where it inhibits insulin release[1].

The UTS2 gene encodes a member of the urotensin family of peptide hormones. The encoded preproprotein undergoes proteolytic processing to generate a mature, functional hormone before secretion into the plasma. Mice lacking the encoded protein have a significantly decreased low density lipoprotein cholesterol (LDLC) profile and hepatic steatosis that is consistent with decreased hepatocyte de novo cholesterol synthesis and apolipoprotein B secretion. 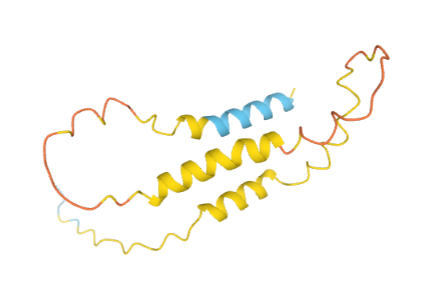 Disorders Related to the UTS2 Gene

Homozygous inactivation of gene Uts2 leads to alterations in macrophage and hepatic cholesterol homeostasis.The researchers found that histologic staining of formalin-fixed and paraffin embedded liver sections from WT and Uts2 (denoted as UII) knockout (KO) mice fed a high fat diet treated with hematoxylin and eosin revealed the presence of extensive hepatic steatosis in WT mice (Fig. 2A). In contrast, there was little to no steatosis in the liver sections of UII KO mice (Fig. 2B)[5] .

Figure 2 Hematoxylin and eosin stained paraffin sections of livers from wildtype (WT) (A) and UII KO mice (B). Abundant steatosis is evident in WT livers, but absent in UII KO livers.[6]

Mice were fed a hypercholesterolemic diet and then serum from WT and UII KO mice were submitted for high-performance liquid chromatography (HPLC) to separate the plasma lipoproteins based on size. Free cholesterol (FC) (Fig. 3) and triacylglycerol (TG) content of each fraction was determined. The UII KO serum profile exhibited less LDL cholesterol than WT (Fig. 3), with a reduction in size of LDL and relative amount of LDL. As well, UII KO serum possessed significantly more high density lipoproteins (HDL) of a larger size. 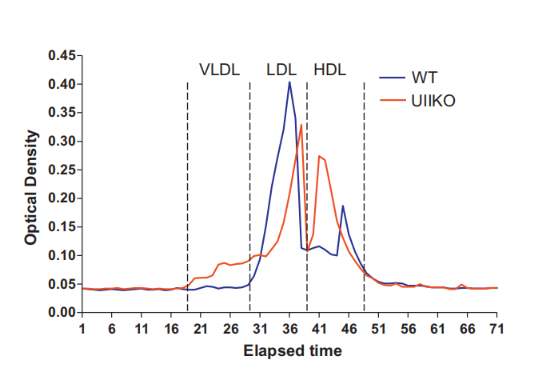 Fig. 3. HPLC profile of UII KO mice compared to WT. HPLC of serum samples from UII KO mice were run on a HPLC system specifically calibrated to separate lipoproteins from small volumes of serum. This profile (average of 6 runs) was compared to serum from WT mice as previously described .[6]

To determine basal activity of acyl-CoA:cholesterol acyltransferase (ACAT) under lipid poor and lipid loaded conditions, macrophages were isolated from WT, ApoE KO and UII KO mice and grown in culture according to established protocols. Cells were grown in the absence of serum for 16 h and then provided with 10% lipoprotein deficient autologous sera (DS) or 10% autologous sera (AS; instead of FBS to assure no reintroduction of UII or ApoE), in the presence of 5μ  Ci3H-cholesterol for 8 h or 24 h. To determine the ACAT specific activity, we performed a duplicate condition with ACAT inhibitor (58035) for each time point and then subtracted it. CE formation was measured by extraction of cell lipids and thin layer chromatography and results are presented as the mean percentage CE of total radioactive cholesterol or as cpm/g cell protein (±SD; n = 4 for each data point). Results demonstrate that under cholesterol loading conditions, specific ACAT activity was elevated in UII KO macrophages, compared to WT and ApoE KO (Fig. 4). UII protein has many physiological and pathophysiological activities, such as vasoconstrictor and vasodilatory actions, cell proliferation, pro-fibrosis, neuroendocrine activity, insulin resistance and carcinogenic and inflammatory effects, which have been recognized only in recent years. In fact, UII is involved in the process of inflammatory injury and plays a key role in the onset and development of inflammatory diseases[7].

Lipopolysaccharide (LPS) binding to TLR4 initiates MyD88-dependent and  -independent (or TRIF) signaling pathways to induce the production of pro-inflammatory  cytokines by activating NF-κB and p38 MAPK and IRF3, respectively. Association of the UII polypeptide with its receptor UT upregulates the levels of nuclear p38 MAPK phosphorylated protein and promotes nuclear transfer and DNA-binding activity of the NF-κB p65 subunit, leading to gene expression of pro-inflammatory cytokines. In parallel, the UII/UT system activates IRF3-IFN-β signaling to increase TNF-α and IL-1β protein levels. 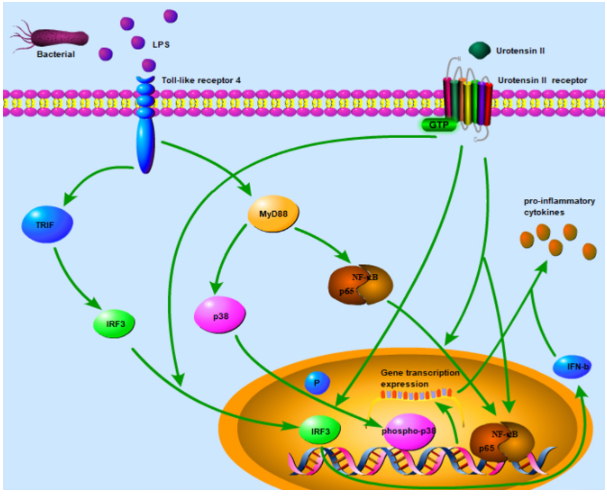 There are relatively few studies on Uts2 knockout mice, but their opinions and test methods are not the same as those of conventional lipid metabolism studies. Interested researchers can refer to more related articles to explore the differences. In addition, for Uts2, the new research direction will focus on the study of its proinflammatory function. Uts2 will activate the inflammatory pathway and up-regulate the expression of related proteins. Interestingly, if these two aspects are combined, is inflammation related to abnormal lipid metabolism? Future research efforts may help elucidate the distinct mechanisms of inflammation and lipid metabolism.

The Cyagen Knockout Catalog Model repository offers research-ready Uts2 and Uts2b knockout (KO) mouse models deliverable in as fast as 3 months. For a custom Uts2 research model, contact us for a complimentary consultation and quote.

[Animal Breeding & Health]-NO.1 Focus on Ectromelia Virus (ECTV)
Do You Know About Gene Therapy Research?
Uses of Humanized Mice in Tumor Immunotherapy Study
Gene Fgf20 Mouse Models and New Research Progress
We use cookies to ensure that we give you the best experience on our website. To learn about how we keep your information safe, view our Privacy Policy. OK Privacy policy