How to Validate Your CRISPR Knockout Cell Line?

How Does the CRISPR/Cas9 System Work?

The CRISPR-Cas9 system consists of two key molecules - an enzyme called Cas9 and a piece of RNA called guide RNA (gRNA). For the CRISPR/cas9 gene editing system, the first stage is the combination of single gRNA (sgRNA) and protein Cas9. In the second stage, to achieve the purpose of gene editing, the transcribed CRISPR RNA (crRNA) will form pre-crRNA to guide the Cas9 protein to cut the same target region as sgRNA on the genome. Lastly, the error-prone cellular repair mechanism known as non-homologous end joining (NHEJ) repairs the gene to complete the genetic knockout.

There are two main strategies for using CRISPR/Cas9 to achieve gene knockout, described below.

The first strategy is to knockout most of the exons for the functional domain that encodes the target gene to render it inactive. For this knockout strategy, the knockout effect can be guaranteed after the knockout, and there will be no protein residue problem, but there are some disadvantages. If the target gene fragment is too long, the difficulty of knockout will be increased. In addition, knockout fragments will dissociate in the cell and may be randomly inserted into other positions in the genome in the form of non-homologous end joining (NHEJ), which will reduce the positive rate of knockout.

The second is to knockout individual exons to cause a frameshift mutation, which achieves the purpose of target gene knockout. This knockout strategy is easier to obtain homozygous knockout cell lines at the DNA level. However, this knockout strategy requires the design of sgRNA at the appropriate position. Otherwise, it will cause both frameshift and open reading frame (ORF) changes at the DNA level, but protein expression may still be found when using western Blot (WB) to detect the protein product of the targeted gene. 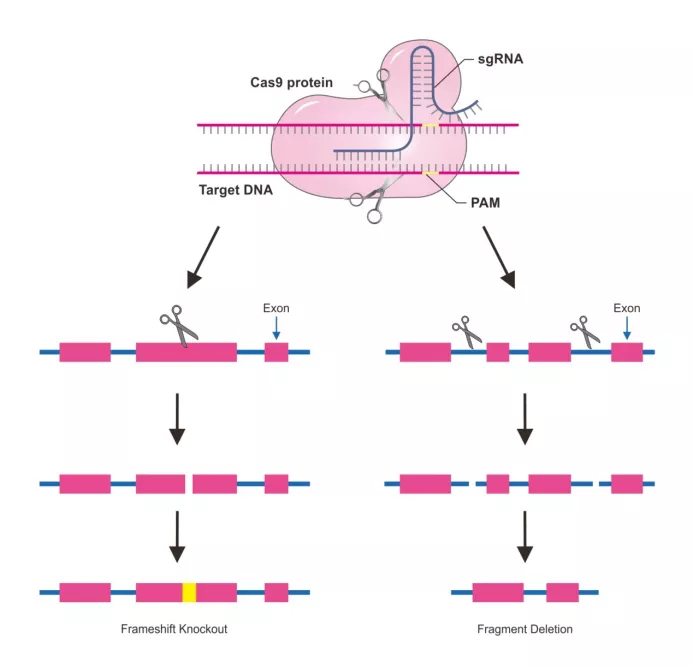 In addition, there are some unusual strategies to achieve gene knockout, such as introducing a donor vector. By introducing a homologous recombination (HR) vector, a stop codon is introduced into the HR vector to terminate gene translation. Another strategy is to introduce a selection marker into the HR vector, which inserts the selection marker into the coding region of the target gene, and destroys the function of the target gene.

Once a CRISPR knockout (KO) cell line has been established, adequate validation of the specific gene edits is important. To verify whether the knockout cell line is successfully constructed, the first step is to confirm its genomic levels. Fragment knockout has the following identification strategies (shown in Figure 2). Design primers to amplify three regions by PCR, which are the region end caps (Region 1 and Region 2) and the knockout region (Region 3) of the two gRNAs. If a DNA band cannot be amplified in the region affected by gRNA and the region 3 band that is amplified in the complete knockout region is smaller than the wild-type, it means that the cell line has been knocked out at the genomic level. The sgRNA knockout method usually produces small insertions and deletions (INDELs). When the number of generated indels is not a multiple of 3, it will cause frameshift mutation and knockout. As agarose gel only distinguishes DNA fragments with a difference of 100bp or more, it is unable to verify whether indels are generated. Therefore, it is necessary to continue to sequence and identify the amplified products. The sequencing results are compared with the wild-type sequence. If indels other than multiples of 3 occur, it means that the cell line has been knocked out at the genomic level.

In addition to verifying the genomic level of frameshift mutations, Western Blot (WB) testing can be used to confirm the effect of knockout. As shown in Figure 5, there was no expression of the target protein in the knockout cell line, indicating that the knockout cell line was constructed. Based on the experience of many cases in Cyagen, as long as a variety of factors are considered comprehensively in the planning stages of the study scheme and the sgRNA is reasonably designed, ideal experimental results can be obtained whether using frameshift knockout or fragment knockout methods.

When carrying out knockout experiments, it is necessary to design a plan according to the actual situation. Factors such as the target gene, cell type, and downstream experiments will affect the design of the protocol and the final result. Does the target gene affect cell survival? Does the cell type affect the knockout efficiency? Do different import methods affect downstream experiments? If the knockout gene is related to cell cycle, proliferation, and metabolism, the knockout may be fatal, and it is difficult to obtain knockout homozygous cell lines. It is also difficult to carry out knockout experiments for cell types with slow proliferation, because sluggish cell proliferation affects the cell’s DNA repair activity and reduces editing efficiency.

There are three common ways for us to introduce the CRISPR/Cas9 system into cells: Cas9-gRNA Ribonucleoprotein (RNP) delivery, plasmid vectors, and viral vectors for CRISPR.

Generally, we will use RNP to deliver, directly synthesize sgRNA single strands, and incubate with Cas9 protein in vitro to form RNP complexes, and then introduce RNP complexes into cells by electroporation. The advantage is that it is time-saving and efficient. It not only obtains a homozygous knock-out monoclonal cell line in a short time, but also does not cause the integration of foreign genes in the genome. The use of plasmid vectors and viral vectors to deliver is suitable for cell lines with slower cell proliferation rates. Moreover, the delivery of viral vectors will introduce the integration of foreign plasmid sequences. The specific selection of knockout methods must be comprehensively judged based on downstream experiments.

Contact us with your gene target(s) and desired model(s) - our experts will be in touch with you to provide a free project strategy and quote.