Lentiviruses (LVs) are one of the commonly used delivery vectors for cell and gene therapy. Its main function is to transfer and integrate the target gene into the genome of the host cell, which can be used to study the biological regulation mechanisms at the genetic level. As a viral vector with a wide host range, it is able to transfect dividing and non-dividing cells such as neurons, hematopoietic stem cells, and immune cells, especially T cells.

In recent years, lentiviral transduction techniques have been successfully applied to the preparation of CAR-T cells. This article will help you grasp a basic understanding of lentiviral vector preparation and its applications.

The lentiviral (LV) vector system is based on the human immunodeficiency type I (HIV-1) virus, a well-studied human pathogen. The lentivirus four-plasmid system is widely used in scientific research and clinical research and belongs to the third-generation lentiviral packaging system, which consists of one expression plasmid containing the target gene, two packaging plasmids, and one envelope protein plasmid.

The packaging plasmid contains the cis-sequences (RRE, ψ, LTRs) required for packaging, reverse transcription and integration, and the target gene or marker gene (green fluorescent protein GFP). One packaging plasmids contains both Gag and Pol genes: Gag encodes core proteins (matrix proteins, capsid protein and nuclear capsid protein), whereas the pol gene encodes the enzymes that accompany the ssRNA. Of these, reverse transcriptase carries out reverse transcription of the viral RNA to DNA, integrase catalyzes the integration of the proviral DNA into the host genome, and protease is involved in gag-pol cleavage and virion maturation. The other contains the REV gene, which encodes the Rev protein that binds to the RRE in the lentiviral genome to transport genomic mRNA from the nucleus to the cytoplasm.

The envelope protein particle replaces the env gene of the provirus with the vesicular stomatitis virus glycoprotein G gene (VSV-G). With it, the pseudo-configured lentiviral vector expands its target cell tropism range, and also increases its stability.

Thus, genome mRNA and capsid proteins, envelope proteins, etc. are assembled into pseudovirions. The four-plasmid packaging system and the use of VSV-G protein greatly reduce the possibility of generating replication-competent lentiviruses.

Figure 1. The 4-plasmid system of the third-generation lentivirus [1].

Lentivirus as A Tool for Researchers

With lentiviral vectors, it is possible to stably overexpress specific genes, study the regulatory mechanism of promoters, or silence specific gene expression by RNA interference. A lentiviral expression vector contains the genetic information required for packaging, transfection, and stable integration. In order to improve the efficiency of transfection, it is necessary to obtain a high titer of virus particles, which depends on  the state of the cells for packaging, the size of the target gene, the quality of the plasmid and the timing of collection. The packaged virus particles are secreted to the extracellular culture medium, and the supernatant obtained by centrifugation can be directly used for infection of host cells. After the target gene is delivered to host cells, it is integrated into the host cell genome through reverse transcription, so as to express the corresponding protein at a high level.

The lentiviral vectors can be selected according to various experimental objectives, with examples including: 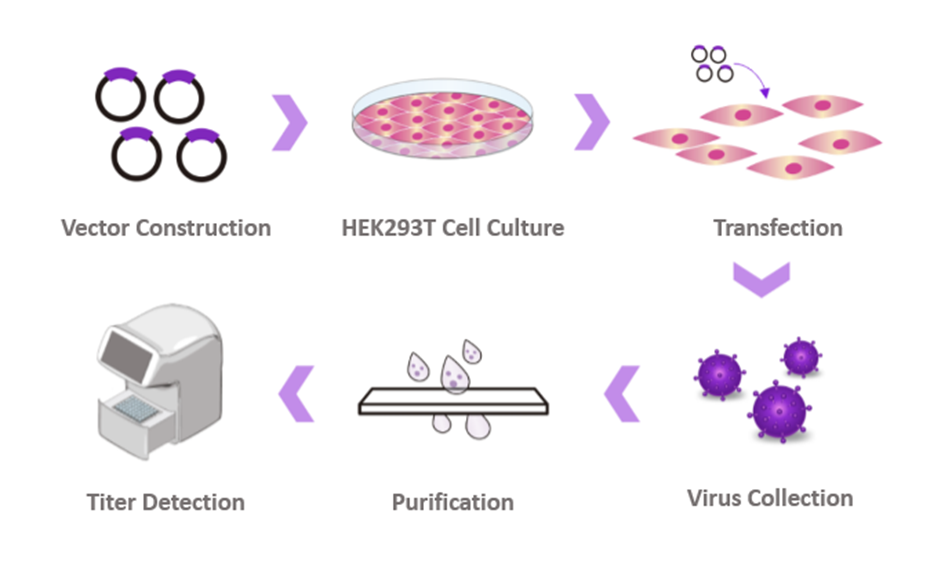 The resting state is a unique feature of the immune system, in which T lymphocytes can remain undivided for a long time[3]. Most circulating T cells in the blood are in this state, and are characterized by a low metabolic rate, low transcription levels, small size, and very long survival[4] .

In Zack et al. 's study on HIV[3], the limitations of T cells in the resting state of HIV infection were introduced in detail. First, the preintegration of HIV in resting T cells is inhibited. Compared with activated T cells, the infection ability of the virus remains unchanged, but there are significant differences in reverse transcription, such as slower reverse transcription and unstable cDNA of the virus. Second, there are defects in HIV expression in resting T cells, including LTR defects and gene integration into transcriptional repressed regions.

A number of studies have shown that the viral systems, including the parent virus HIV-1 and its derived vectors, can enter T lymphocytes in the resting state but not replicate[5] . The main reasons include:

1. Defects in the initiation and completion of reverse transcription

3. Lack of integration of proviral genomes

Transfection of HIV-based lentiviral vector systems in resting T cells remains difficult. Therefore, T cells need to be activated before transfection. For example, induction of resting T cells into the G1b phase of the cell cycle through stimulation of T cell receptors and CD28 co-stimulatory receptors using anti-CD3 and anti-CD28 antibodies can make cells susceptible to HIV-1 infection and replication[6]. Alternatively, exposure of T cells to cytokines that do not trigger cell division can also enable HIV-1 vector transduction[7]. 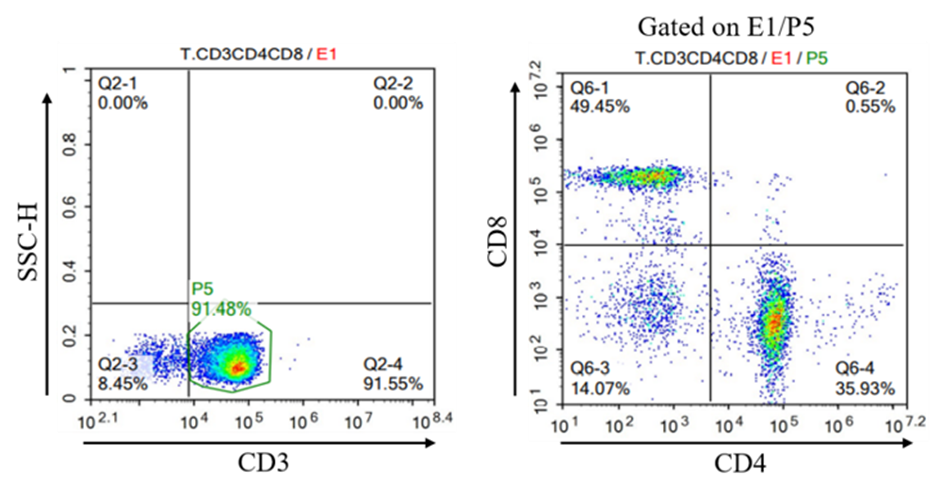 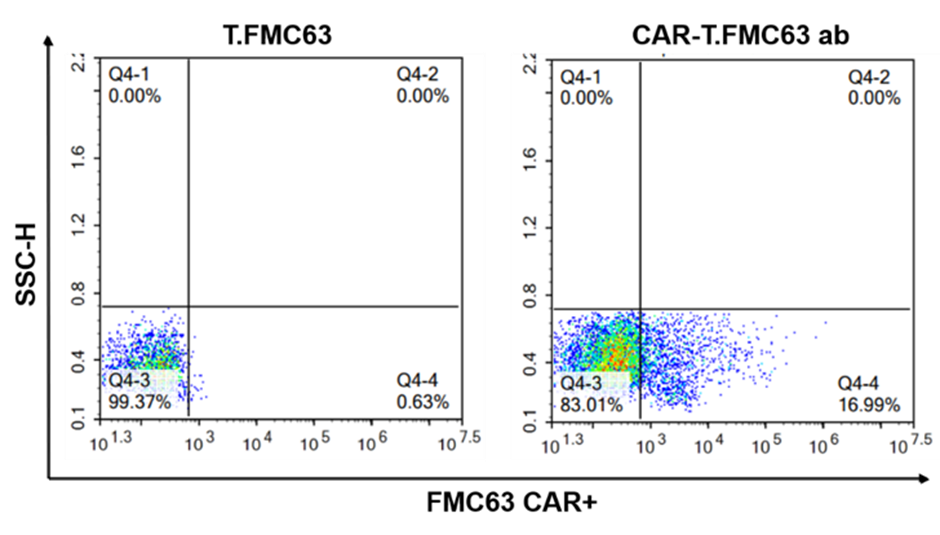 Figure 3. A case of lentivirus transfection of T cells by Cyagen.

(Above: The T cell proportion and experimental results of phenotypic analysis results on day 10 of PBMC activation and amplification. Below: CAR positive detection results of FMC63 CAR T cells.)

In the study of Pawan K. Shahi et al. [8], the mechanism of action between KCNJ13 gene and Kir7.1 channel was verified.  First, the research group obtained KCNJ13 gene-deficient human induced pluripotent stem cell (hiPSC)-RPE cells, and verified that the cells have normal morphology but do not express functional Kir7.1 channels, so they are not physiologically active.

To investigate the effect of KCNJ13 gene on the expression of Kir7.1 subunit, the group used the lentivirus pLV-EF1α Kir7.1-GFP packaged by Cyagen, successfully delivered KCNJ13 gene to hiPSC-RPE cells, and restored the Kir7.1 channel function. Results demonstrate that the RPE membrane potential returns to normal after transfection and the protein is successfully expressed (Figure 4, below).

Cyagen has adopted the mature and stable third-generation lentivirus packaging platform — which offers high titer, low cytotoxicity and high infection efficiency — to provide overexpression, interference, gene knockout lentivirus and CAR molecular design and packaging services for a variety of tumor antigens. We also provide one-stop service for CAR-T cell therapy in vivo and in vitro research. Contact us  to see how Cyagen can help achieve your goals!

Fight for Sight - Targeting Genetic Factors of Ophthalmic Diseases
SYNGAP1-Related Intellectual Disability (MRD5)
Rare Diseases Caused by the CEP290 Gene
Why Are My Rodents Balding? Learn about Barbering
We use cookies to ensure that we give you the best experience on our website. To learn about how we keep your information safe, view our Privacy Policy. OK Privacy policy