Novel Insights Into The Prevention And Treatment Of Cardiovascular Disease

The birth of a gene therapy drug is based on performing sufficient basic research with both innovation and integrity to be used for pre-clinical research and clinical trials. Today, we discuss a research paper published by a client of Cyagen Biosciences as an example to show you the foundational ideas of successful preclinical research on gene therapy for cardiovascular disease.

Cardiac hypertrophy is an early sign of cardiovascular disease, which may subsequently lead to diastolic dysfunction, arrhythmias, and eventually heart failure. Therefore, understanding the key molecular mechanisms of pathological hypertrophy is crucial for the development of new therapeutic targets and strategies.

The research publication was based on the following findings and methods, which integrated human and mouse biology to obtain the results discussed:

2. A TβRIII transgenic mouse model was constructed, and it was found that overexpression of TβRIII can induce cardiac hypertrophy in mice;

4. Mechanical study: it was found that TβRIII induces cardiac hypertrophy through activation of CaMKII by β-Arrestin2.

Expression of TβRIII in Human and Mouse Cardiac Hypertrophic Samples

The authors initially examined TβRIII expression profiles in human cardiac hypertrophic specimens. Significantly elevated expression of TβRIII was found in human cardiac hypertrophy samples, as were biomarkers such as atrial natriuretic peptide, brain natriuretic peptide, and β-MHC (Figure 1A, 1B, and 1C). Then myocardial hypertrophy was induced in mice by ISO infusion or TAC, and it was found that the expression of TβRIII in the left ventricle (LV) was significantly increased (Figure 1D and 1E). Moreover, immunofluorescence staining clearly showed that TβRIII was expressed in mouse LV tissue (Figure 1F, a). Line-scanning analysis of the fluorescence intensity suggested that TβRIII was mainly present in the vicinity of the plasma membrane of mature cardiomyocytes (Figure 1F, b). These results suggested that an increased expression of TβRIII may play a role in the development of cardiac hypertrophy. 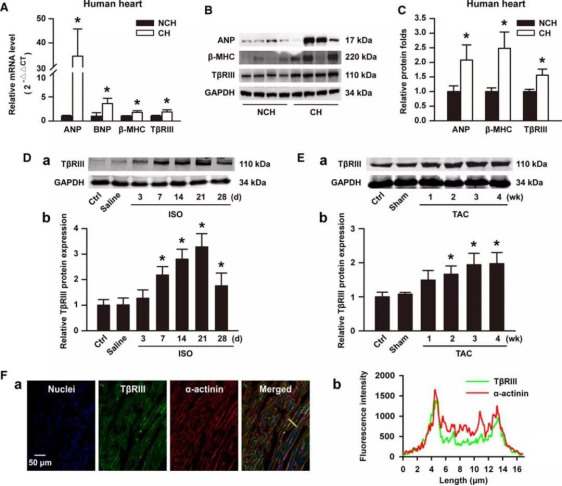 The researchers reproduced phenotypes (such as cardiac hypertrophy) in animal models by generating cardiac-specific TβRIII transgenic (CS-TβRIII-Tg) mice. They used the cardiac-specific α-MHC promoter to overexpress TβRIII in the heart of mice (Figure 2A) and demonstrated the successful establishment of the mouse model by Western blotting (WB) and quantitative polymerase chain reaction (qPCR) (Figure 2B and 2C) . Then, a series of experiments were carried out using the CS-TβRIII-Tg mouse model established by Cyagen Biosciences. 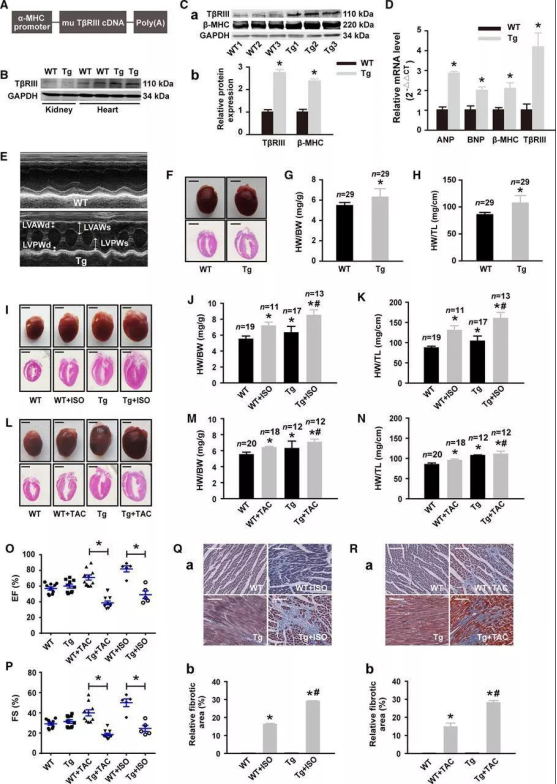 Compared with WT mice, the hypertrophic index induced by ISO or TAC treatment in shTβRIII mice was significantly reduced, and myocardial hypertrophy and cardiac function impairment were alleviated. (Figure 3C). By calculating the ratios of LV mass/body weight and LV mass/tibia length, it was also demonstrated that the knockdown of TβRIII reduced the cardiac hypertrophy indices (Figure 3D through 3G). Furthermore, 12 weeks after TAC operation, the ejection fraction (EF) and fractional shortening (FS) declined remarkably in both the WT and the AAV9-mediated scramble shRNA-infected mice, which indicates that reducing the expression of TβRIII can alleviate the myocardial contractile function damage caused by TAC (Figure 3H and 3I). Furthermore, the increased expression levels of cardiac hypertrophy markers β-MHC protein and atrial natriuretic peptide, brain natriuretic peptide, and β-MHC mRNA induced by ISO or TAC were significantly decreased by the cardiac-specific knockdown of TβRIII (Figures 3J through 3L).

In this study, the researchers used AAV9 vector-mediated specific shRNA to reduce the expression of endogenous TβRIII in mice and observed that shTβRIII mice had a significantly reduced cardiac hypertrophic disease phenotype compared to control mice. This indicates that reducing the expression level of TβRIII can improve cardiac function by alleviating damage, and also verifies the function of TβRIII in the pathogenic mechanism of cardiac hypertrophy. 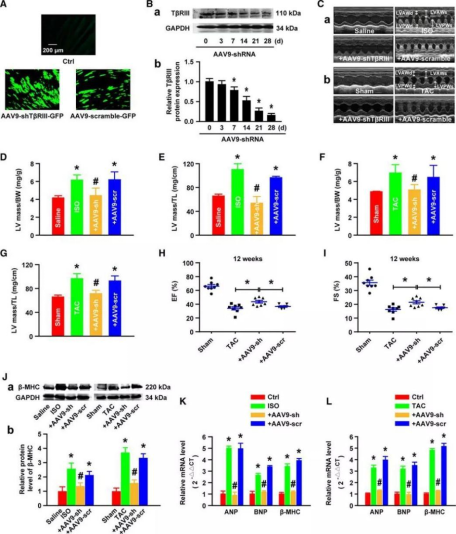 TβRIII induces cardiac hypertrophy through activation of CaMKII by β-arrestin2

After analysis, the researchers found that TβRIII can interact with β-Arrestin2 to affect proliferation and migration in various cancer cell types and that calmodulin-dependent protein kinase II (CaMKII) plays an important role in this process. Therefore, the authors conducted in vivo and in vitro studies and finally found that TβRIII interacts with CaMKII through β-Arrestin2 to induce cardiac hypertrophy.

In this study, the authors provide substantial and accurate data showing that TβRIII induces cardiac hypertrophy through β-Arrestin2-dependent CaMKII activation. This finding contributes to further understanding of the mechanism of cardiac hypertrophy and confirms that interfering with TβRIII expression in cardiomyocytes by the AAV delivery system may be a way to prevent and cure cardiac hypertrophy.

Amyotrophic Lateral Sclerosis (ALS): A Rare Disease More Common in EU&US
Amyotrophic Lateral Sclerosis (ALS) - A Fatal Disease Racing Against Time
Novel Insights into the Animal Models of Huntington's Disease (HD)
What is Huntington's Disease?
We use cookies to ensure that we give you the best experience on our website. To learn about how we keep your information safe, view our Privacy Policy. OK Privacy policy