Introduction to the Cre-Lox Recombination System

1. What is the Cre-Lox System?

There are two main parts of the Cre-Lox system, both of which have been adapted from the P1 bacteriophage：

The palindromic DNA region recognized by Cre recombinase are known loxP (locus of X-over P1) sites. LoxP sites are directional 34 bp sequences made up of two 13 bp reverse complement on both sides (the recognition sequence of Cre recombinase) and an 8 bp spacer region (the position where recombination occurs) which gives it directionality. The orientation of LoxP sites can result in three genetic recombination events, including excision, inversion, and translocation. In addition to wild type LoxP sites, there are common sites such as Lox2272, Lox511, Lox5171, and more - these mutant Lox sites can also be recognized by Cre recombinase. However, only two of the same mutant lox sites can recombine with each other.

Compared with constitutively expressed gene mutations, conditional models provide greater temporal and regional control of gene expression. The Cre-Lox recombination system enables the generation of tissue-specific or inducible knockouts with a high level of control over the spatial and temporal expression of genes. 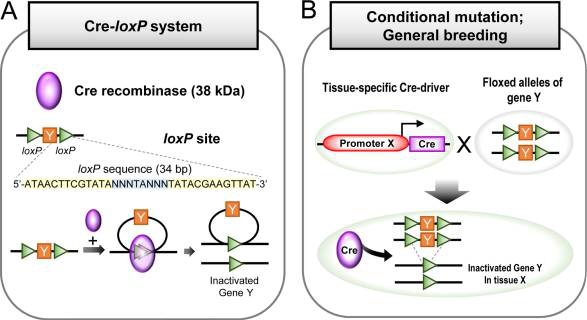 As outlined in Figure 1 above, the basic Cre-loxP recombination event is most often used for controlled excision of genetic sequences. This has been adapted to create Cre-dependent sequence knockout (KO) – depicted in figure 1 - and Cre-dependent gene expression models – such as the transgene switch strategies described below.

Despite the utility of the Cre-Lox modeling strategy, the complexity of breeding protocol alongside the increased cost of rat colony maintenance has created significant barriers for researchers seeking to make novel conditional rat models. Another major constraint faced by researchers developing cKO or cKI rat models is the lack of Cre lines specific to the target of interest.

Below are some of the current Cre rat strains under-development:

Still looking for your Cre line?
Cyagen can provide pricing accommodations to researchers interested in Cre lines not currently available in our listings. Contact us to inquire about your conditional model needs and see how we can help develop a custom Cre strain to support your field of study.

Cyagen offers a "one-stop shop" tailored to your gene research and model generation needs. Our services range from DNA vector construction to embryonic stem cell manipulation, microinjection, and breeding. All projects are fully customizable and flexible.