What Are The Key Points Of CAR T Cell Therapy?

Chimeric antigen receptor T cells (also known as CAR T cells) are T cells that have been genetically engineered to produce an artificial T cell receptor for use in immunotherapy. Chimeric antigen receptors (CARs) are receptor proteins that have been engineered to give T cells the new ability to target a specific antigen. CAR T cell therapy uses T cells engineered with CARs for targeted cancer therapy. Scientists retrieve T cells from people, genetically alter them, then infuse the resulting CAR-T cells into patients to attack their tumors.[1] CAR T cell therapy is not limited to relying on the major histocompatibility complex (MHC) for antigen presentation, and can be activated by binding to the target antigen, thereby efficiently killing tumor cells.

CAR T cell therapy has already achieved unprecedented success in treating hematological malignancies. In the previous article, we reviewed the challenges of this therapy in solid tumor research, and today we will discuss the key point of CAR T cell therapy: the structure and design of CAR proteins.

Read on to learn about the 3 main parts of CAR proteins and how CAR protein engineering has evolved across five generations of CAR design approaches to create a strong platform for cell therapy research and development. 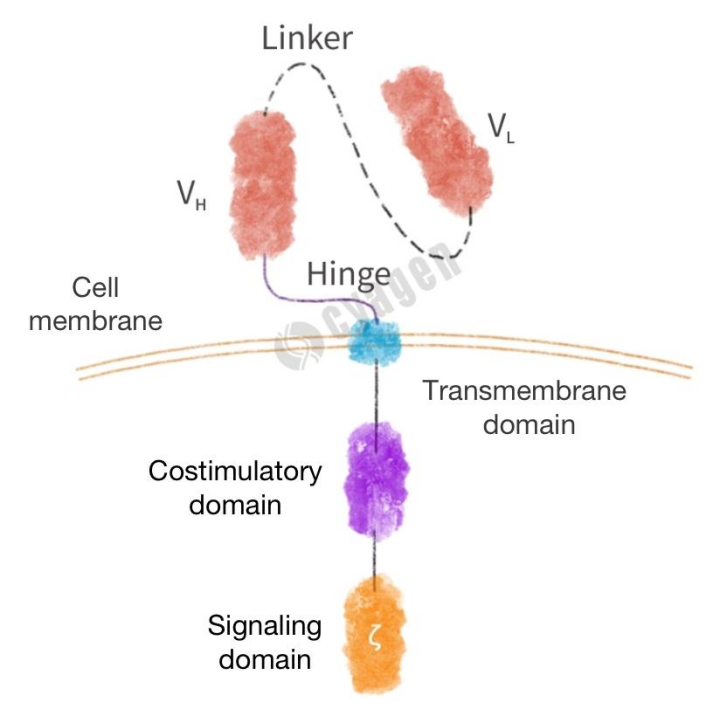 The specificity and affinity of scFv targeting tumor antigens are the basis for the safety and effectiveness of CAR-T therapy. Tumor-associated antigen (TAA) is the main target of immunotherapy, which is highly expressed in tumor tissue and expressed at a lower level in normal tissue. This can lead to off-target, off-tumor damage to non-tumor (healthy) tissue and even create life-threatening toxicity. Therefore, the specificity of scFv for CAR design is crucial. In order to avoid off-target, off-tumor side effects, it is very important to study the specificity of antibodies.

The affinity of scFv is a particularly important variable in the antigen-binding domain, which accounts for multiple receptor-ligand interactions and fundamentally determines the function of CAR. The antigen binding affinity of CARs must be moderated in order to recognize antigens on tumor cells, induce CAR signaling, and activate T cells. On the one hand, the affinity must be sufficient to activate T cells and kill tumor cells; on the other hand, it must be controlled so that it cannot produce toxicity to tissues with low antigen expression, or cause self-exhaustion and death due to excessive activation. Furthermore, in order to optimize the binding of CAR molecules to their target antigens, other factors need to be considered, such as epitope position, ligand density on target cells, and the affinity of individual ligand binding domains.

Other variables of scFv also affect the function of CAR. For example, the mode of interaction between VH and VL and the relative positions of the complementarity determining regions (CDR) can affect the affinity and specificity of CAR for its target epitope. The structure, spatial availability, and function of the target epitope are also factors that need to be considered in the design of CAR.

Last but not least, immunogenicity is also a factor that cannot be ignored. The murine monoclonal antibody (mAb) prepared by hybridoma technique has strong immunogenicity and can be regarded as an antigen by the human immune system, which may trigger immune system-mediated rejection and even cause severe immune diseases. Therefore, humanization of scFv can help improve the safety and therapeutic potential of CAR T cells.

In summary, the affinity, specificity, target epitope, and immunogenicity of scFv are crucial considerations in the design of CAR.

The hinge region is defined as the extracellular structural region that extends the binding units from the transmembrane domain. The hinge functions to provide flexibility to overcome steric hindrance and contributes to the length in order to allow the antigen-binding domain to access the targeted epitope. The difference in the length and composition of the hinge region will influence the expression and flexibility of CAR, and ultimately affect the signal transduction, epitope recognition and other functions of CAR. Therefore, the optimal hinge region structure must be tailored for each specific antigen-binding domain.

The co-stimulatory domain in CAR provides a second activation signal to T cells. The most common co-stimulatory domains are CD28 and 4-1BB. The CD28 co-stimulator induces a stronger acute response but less persistent, whereas the 4-1BB factor is less activating but has a longer persistence. Intracellular signaling domains help define the generation of a CAR T cell, and their involvement improves T cell proliferation, cytokine secretion, resistance to apoptosis, and in vivo persistence.

The T-cell receptor (TCR) is intimately associated intracellularly with the CD3 dimer, which carries an immunoreceptor tyrosine-based activation motif (ITAM). ITAM initiates T cell activation signals after phosphorylation by lymphocyte-specific protein tyrosine kinase (LCK). For many years, the CD3ζ chain has been used as a standard CAR signaling domain, and factors such as the number and position of ITAMs also provide information for CAR design. 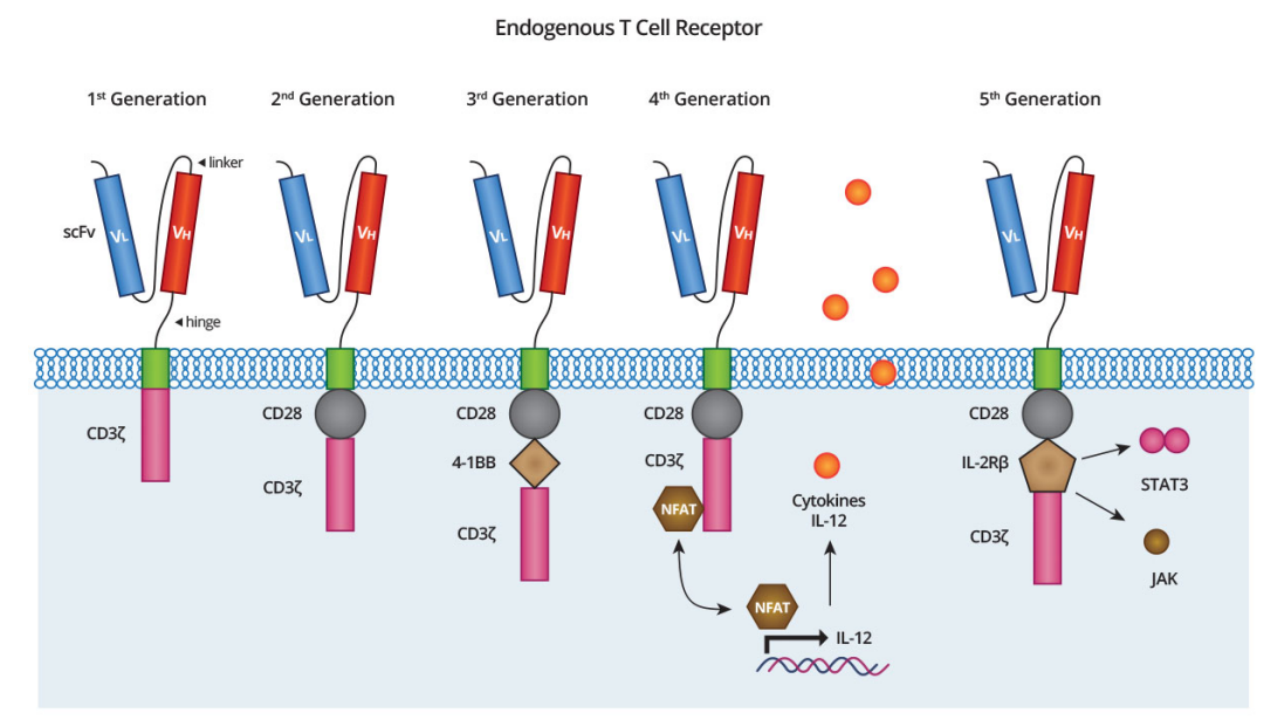 In the late 1980s, Zelig Eshhar et al.[3] fused the antibody scFv directly with CD3ζ into one protein and demonstrated that T cells expressing such a fusion protein could signal, secrete interleukin, and kill lymphoma cells expressing a specific antigen in vitro. This is how the first generation of CAR T cells was born. Due to the lack of a co-stimulatory domain, the first-generation CAR T cell has great limitations, such as low signal transduction efficiency, weak proliferative ability in vivo, and short survival time; thus, it ultimately failed to achieve the expected efficacy in clinical applications.

Scientists introduced a co-stimulatory domain (CD28 or 4-1BB) on the basis of the first-generation CAR T cell design, which enhanced the ability of T cells to respond to activation signals, enabling them to show surprising therapeutic effects in clinical applications. So far, the CAR T cell therapy drugs that have been marketed are all second-generation products, such as Kymriah and Yescarta.

Scientists introduced two costimulatory domains (CD28 and 4-1BB) on the basis of the second generation to generate the third generation of CAR T cell, hoping to achieve better signaling effects. However, this is not the same effect as a simple ‘addition’ arithmetic problem. Adding multiple co-stimulatory factors may weaken or even prevent signaling by changing the length of the CAR T intracellular domain. The clinical benefits of this approach are therefore still controversial.

In order to enhance the function of CAR T cells, scientists introduced an intracellular domain into the fourth-generation CAR T cell to co-express some small molecule substances (such as the pro-inflammatory cytokine IL-12), expecting to achieve stronger efficacy. It can trigger cytokine-induced signaling or block signaling pathways that affect CAR T cell function.

The fifth-generation CAR T cells, also known as universal CAR T (UCART), are made by knocking out T cells obtained from volunteers in good health and then transferring the CAR gene that integrates an additional membrane receptor, such as the IL-2 receptor. Its main advantage is that T cells can be supplied directly from the bank without obtaining samples from the patient, which greatly saves time and treatment costs.

Each module of CAR independently and synergistically affects the function of CAR T cells. In general, modification of scFv and co-stimulatory molecules is the entry point for CAR design and optimization. In addition to the five generations of CARs mentioned above, there are other novel types designed for different purposes, such as bivalent tandem CARs targeting antigen loss, inhibitory CARs that specifically recognize healthy tissues, and CARs carrying suicide genes. However, it has also been shown that the hinge region and transmembrane domain may be potentially important components of CAR design, which are crucial for improving CAR-based antitumor functions. Since CAR design involves multiple components, it is difficult to examine the wholistic effect during optimization. Therefore, systematic evaluation and comprehensive consideration must be carried out to point out the direction for the design of next-generation CAR T cells.

Research Progress of CAR T Therapy in Solid Tumor Treatment
Cystic Fibrosis and the CFTR Gene
CAR T Cell Therapy Review: Challenges in Solid Tumor Research
Genetic Disorder: Cystic Fibrosis, The Salty Kiss
We use cookies to ensure that we give you the best experience on our website. To learn about how we keep your information safe, view our Privacy Policy. OK Privacy policy