How Does Depression Affect Antiviral Immunity?

Research shows that moods - both good and bad - affect heart and brain health. In recent years, depressive disorders have become a significant public health issue. Unlike ordinary mood swings and short-lived emotional reactions, depression can lead to serious health problems when it recurs and becomes moderate or severe. Patients with major depressive disorder (MDD) experience great reductions in quality of life, and about 15% of MDD patients ultimately die of suicide.

Depression not only diminishes patients’ quality of life, but also induces or aggravates other diseases. Previous studies have found that depression is strongly associated with disease progression and complications of severe acute respiratory syndrome coronavirus 2 (SARS-CoV-2) and human immunodeficiency virus (HIV). Patients with MDD are at higher risk for varicella-zoster virus (VZV) infection, suggesting that psychiatric disorders may increase patients' susceptibility to viral infection. However, the ways in which depression affects the innate immune response to viral infection is still unclear.

A research team from Soochow University published their findings in Cell Research on July 12, 2022, which elucidated the understanding of the signaling mechanisms of depression-mediated antiviral immune dysfunction and revealed meptazinol as an enhancer of antiviral innate immunity in depressed patients.

Antiviral innate immunity is the first line of defense against viral infection. After virus infection, the pattern recognition receptors (PRRs) of innate immune cells can recognize the pathogen-associated molecular patterns (PAMPs) of viruses and induce the expression of IFN-I. Previous studies have found that a deficiency of the AHI1 protein — which is not only abundant in the hypothalamus and amygdala, but also in multiple cell types, including macrophages — is associated with depression.

The researchers found that AHI1 expression was reduced in peripheral blood mononuclear cells (PBMCs) and macrophages from MDD patients, as well as in lung and liver tissues from the associated mouse model of depression. They also found that Ahi1 knockout (Ahi1-/-) mice were more susceptible to viral infection and exhibited more severe tissue damage in the course of the infection. The above results suggest that depression may weaken the host's antiviral immunity by reducing the expression of AHI1 in multiple tissues.

The researchers further explored how AHI1 deficiency affects antiviral innate immunity. Sequencing results showed that AHI1 deficiency significantly reduced the expression of interferon-stimulated genes (ISGs), suggesting that AHI1 can regulate IFN-I-induced signal strength and cellular antiviral activity. The basal expression of ISG in multiple tissues of Ahi1-/- mice was much lower than that of control mice, and the basal expression of ISGs and IFN-I-induced expression levels in the depression mouse model was also significantly reduced (Figure 1). These results reveal that AHI1 is a crucial stabilizer of IFN-I signaling and its deficiency attenuates the IFN-I antiviral innate immunity. 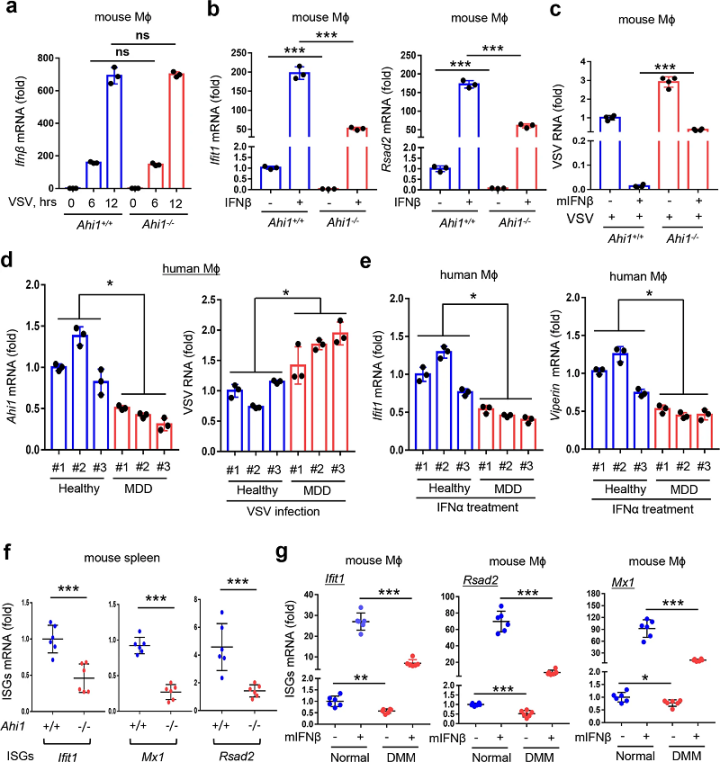 The researchers further explored the mechanism by which AHI1 regulates IFN-I signaling. Their findings confirmed that AHI1 critically regulates the expression levels of the Tyk2 protein in cells. Tyk2, a member of the Janus kinase (JAK) family, is considered a key component in the activation of IFN-I signaling. By mass spectrometry analysis of the potential AHI1-interacting proteins, the researchers noticed a deubiquitinase OTUD1. OTUD1 knockdown inhibited the AHI1-mediated upregulation of Tyk2 levels. Further analysis proved that OTUD1 depends on AHI1 to regulate Tyk2 ubiquitination and protein levels,  and maintain the stability of Tyk2 protein.

Alterations in hormones and endocrine function have been considered to be essential to the development of the pathophysiology of MDD. Therefore, subsequent analysis focused on hormones. They found that depression promotes the secretion of arginine vasopressin (AVP) from the hypothalamus-pituitary-adrenal (HPA) system, leading to a significant increase in AVP levels in peripheral blood. AVP downregulates Ahi1 expression in mice. AHI1 reduction disrupts AHI1-mediated stabilization of cellular Tyk2 by the deubiquitinase OTUD1, thus attenuating IFN-I antiviral immune activity.

By screening some available clinical drugs, the researcher noticed that a potent analgesic, meptazinol, significantly promoted Ahi1 mRNA expression in primary macrophages. Additionally, it can upregulate the protein levels of AHI1 and Tyk2, and promote the expression of ISGs. These results suggest that meptazinol enhances IFN-I signaling and IFN-I antiviral activity by upregulating Tyk2 protein levels by promoting AHI1 expression.

The researchers then performed in vivo experiments on depression model mice. After the injection of meptazinol, the expression of AHI1 and Tyk2 proteins in the mice was up-regulated, as was that of ISGs, and the mouse model of depression could better resist virus infection. Therefore, these findings demonstrated that meptazinol administration in depression model mice largely rescues depression-mediated inhibition of host antiviral immunity through stimulating expression of AHI1. 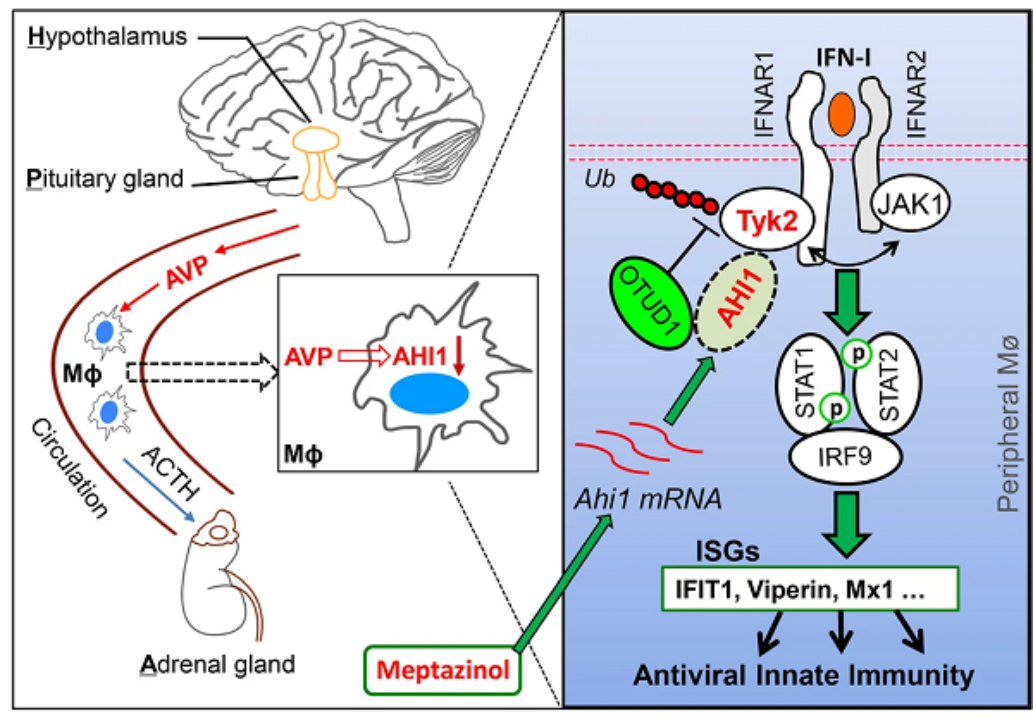 In summary, it was found that depression-elevated AVP induces AHI1 reduction in macrophages, which further disrupts the deubiquitinase OTUD1-mediated stabilization of cellular Tyk2, thus attenuating basal IFN-I signaling and host antiviral immune defense (Figure 2). Importantly, meptazinol was identified as a potent drug for increasing AHI1 expression, which eventually improves cellular IFN-I signaling and rescues the antiviral immunity of depression model mice. This study provides new strategies for boosting antiviral immunity in MDD patients as one way of restoring their quality of life.

If you are interested in gene-edited model mice such as the Ahi1 and Otud1 knockouts (KO) mentioned above, the Otud1-/- mice used in the referenced study are available only from Cyagen!  Cyagen offers a broad portfolio of custom genetically engineered models, ready-to-use catalog models, and drug development models. Our comprehensive services cover the entire process of model generation: from transgenic/gene targeting strategy design, through model development, breeding, cryopreservation, phenotype analysis, and more.

For early stage of discovery research, the Cyagen Knockout Catalog Models repository provides a searchable listing of over 16k knockout (KO) and conditional KO (cKO)/floxed strains from which live mice are deliverable in as few as two (2) weeks. Our repository is constantly growing, so feel free to inquire about the status of any specific gene(s) not shown online for more information about pending availability.

Our comprehensive services cover the entire process of model generation: from transgenic/gene targeting strategy design, through model development, breeding, cryopreservation, phenotype analysis, and more. Considered alongside Cyagen’s Price Match guarantee, we help ensure that you can easily get the most cost-effective model mice for your research! Please contact us for a quotation and strategy.

Animal Models of Major Depressive Disorder: Insights and Research Applications
What Are The Key Points Of CAR T Cell Therapy?
Research Progress of CAR T Therapy in Solid Tumor Treatment
Cystic Fibrosis and the CFTR Gene
We use cookies to ensure that we give you the best experience on our website. To learn about how we keep your information safe, view our Privacy Policy. OK Privacy policy