Everyone feels sad sometimes. When you're sadder than usual, you might say you're feeling "depressed." However, if the sadness or bad mood persists for weeks (or longer) and you experience other changes in behavior, it could be signs of clinical depression, also known as major depressive disorder (MDD).

In recent years, the incidence of depression has increased, but we still know little about its etiology and pathogenesis. Establishing a suitable animal model will help us deeply explore the pathogenesis of MDD and find effective treatments. Herein, we introduce MDD and its related mouse models to help further our understanding of this increasingly common mental disorder in modern society.

What is Major Depressive Disorder?

Major depressive disorder (MDD), also known as clinical depression, is characterized by significant and persistent depressed mood as the main clinical symptom, and is the most common type of mood disorder. The clinical symptoms of MDD include feelings of hopelessness and/or guilt,, loss of interest and happiness, significant weight changes, social avoidance, sleep disturbance, tiredness, and more; in more severe cases, some MDD patients experience severe anxiety symptoms, suicidal ideation and behavior.[1]

The most common time of onset is in a person's 20s,[2][3] with females affected about twice as often as males.[3] The course of the disorder varies widely, from a singular episode lasting months, to a lifelong disorder with recurrent major depressive episodes.

MDD is believed to be caused by a combination of genetic, environmental, and psychological factors,[4] with about 40% of the risk being genetic.[5] Risk factors include a family history of the condition, major life changes, certain medications, chronic health problems, and substance use disorders.[4][5] MDD can negatively affect the patient's personal life, work, or education, and cause issues with sleeping habits, eating habits, and general health.[4][5] In 2017, MDD affected approximately 163 million people (2% of the world's population).[6] The percentage of people who are affected at one point in their life varies worldwide, from as low as 7% in Japan up to 21% in France. Lifetime rates are higher in the developed world (15%) compared to the developing world (11%).[3] The disorder causes the second-highest disability-adjusted life-years following lower back pain.[7]

Depression isn't just a bout of melancholy, it's not a weakness that you can't simply "snap out" of, but is caused by a chemical imbalance in the neurotransmitters of the brain. Those with MDD are typically treated with psychotherapy and antidepressant medication.[4] Medication appears to be effective, but the effect may be significant only in the most severely depressed.[8][9] Hospitalization (which may be involuntary) may be necessary in cases with associated self-neglect or a significant risk of harm to self or others. Electroconvulsive therapy (ECT) may be considered if other measures are not effective.[4]

There is increasing evidence that MDD is a disease caused by the interaction of multiple complex factors such as genetics and environment.[10] Scientists have developed animal models that reproduce typical symptoms of MDD in humans and can help us better understand the pathogenesis of the disease. Commonly used modeling methods for rodents with MDD include: stress modeling, surgical modeling, drug modeling, and genetic modeling [11]. 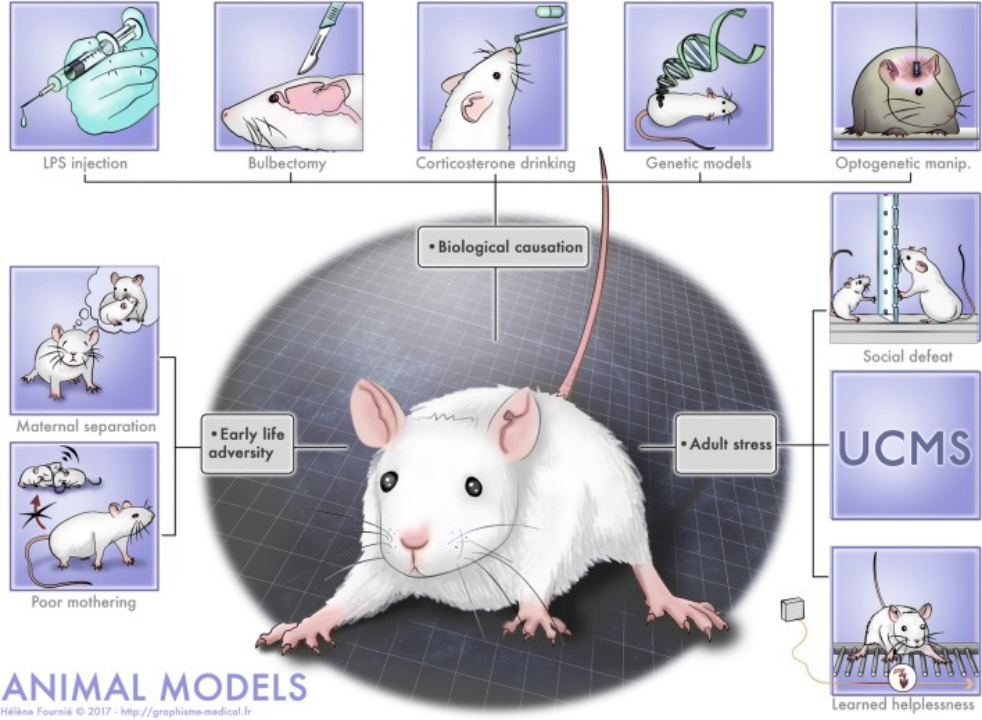 Studies have shown that acute or chronic stress can lead to mental disorders such as depression. Specific modeling methods include imposing uncontrollable and unpredictable stressors on rodents, which can be divided into acute stress models and chronic stress models.

Modeling method: Subjecting experimental animals to constant, unavoidable electric foot shocks; the animals can not learn to avoid the shocks, is known as learned helplessness (LH).

Phenotypic features: Depression-like behaviors such as weight loss, altered motor activity, sleep disturbance, decreased motivated behavior, and anhedonia can be observed. Although it has not yet been proven whether learned helplessness is a unique symptom of MDD patients,  this model is commonly used for preliminary screening of antidepressant drugs.

Modeling method: Experimental animals are placed in cages with aggressive resident mice (such as ICR mice) and subjected to long-term physical and psychological stress. Susceptible animals exhibit negative states and depressed moods due to repeated aggression, corresponding to depression-like behaviors such as social avoidance and anhedonia.

Phenotypic features: A large number of animals is required, resulting in the consumption of experimental facilities and human resources; since female animals are less aggressive and difficult to achieve social defeat, this modeling method is only suitable for male rodents.

Modeling method: Place the animal in a restraint tube immobilized (well-ventilated) for 2-8 hours per day for 14-21 days.

Phenotypic features: The advantage of this model is that the modeling method is simple, and it can show depression-like phenotypes such as reduced social interaction, anhedonia, and impaired spatial learning and memory, which are highly similar to symptoms of MDD in humans. However, its disadvantage is that animals are prone to adapt to repeated restraint stress, making it difficult to maintain depression-like symptoms.

Since a single repetitive stress can easily trigger an adaptive response in animals, using a chronic unpredictable mild stress model can avoid this situation and lead to long-term effective depression-like behaviors.

Phenotypic features: This model shows a persistent depression state, which better simulates the human response caused by long-term exposure to various mild stressors in society, and is highly similar to symptoms of MDD in humans. Therefore, it is currently considered to be the most classic animal model of depression. However, its disadvantage lies in the time-consuming and heavy workload of model development.

This model has good stability, but its disadvantages are that it is only a reference for a certain number of MDD patients because it is produced by olfactory bulb cortex damage and the animal mortality rate is high during the modeling process.

The administration of drugs can induce similar phenotypes as those in depression, but this modeling method usually comes with a number of undesirable side effects.

Chronic corticosterone administration can be given to experimental animals by subcutaneous injection or by exposing them to high levels of glucocorticoids in daily drinking water. After weeks to months, rodents can develop despaired behavior, anhedonia, impaired learning and memory, and anxiety-like behaviors.

This modeling method has the advantages of simplicity and a short production cycle, but there are certain side effects. Additionally, while there are concerns that the method may impair positive valence behaviors associated with reward processing, it remains a useful experimental model for preclinical study of stress-induced mood disorders.

The reserpine administration model has the advantages of fast and simple modeling, and depression-like behavior can appear as soon as 1 hour after intravenous injection. However, the administration of reserpine can produce symptoms similar to Parkinson's disease, such as dyskinesia and hypothermia, resulting in high mortality of experimental animals.

Depression is closely related to genetics. Therefore, many studies have tried to modify the expression of genes associated with vulnerability to developing MDD. Many transgenic lines have been created targeting genes implicated in the serotoninergic and noradrenergic systems, and HPA axis regulation.

Genetic models based on the 5-HT system

5-hydroxytryptamine (5-HT) targeted drugs are commonly used to treat depression, so most genetic models of MDD are based on the 5-HT neuromodulatory system.

▶ Tph1/Tph2: Tryptophan hydroxylase (TPH) is the rate-limiting enzyme in the synthesis of 5-HT, and its two subtypes, TPH1 and TPH2, are involved in catalyzing the 5-HT system. Tph2-/- mice show increased immobility time in the tail suspension test, suggesting that this model develops a depression-like phenotype of despair behavior and has higher levels of anxiety. In addition, the corresponding depression-like behavior was also shown in the Tph1/Tph2 double knockout mouse model.

▶ Vmat1/Vmat2: The vesicular monoamine transporter (VMAT) consists of two proteins: VMAT1 and VMAT2. VMAT1 is enriched in chromogranin, whereas VMAT is mainly expressed in monoaminergic neurons. Vmat2-/- mice exhibit homozygous lethality, while Vmat2+/- mice show obvious depression-like phenotypes, such as despair behavior and anhedonia, but no anxiety-like behavior was observed.

BDNF is the most studied gene for depression. However, homozygous genetic model mice lacking Bdnf did not survive, while the phenotype of heterozygous Bdnf knockout (KO) mice was not different from that of normal animals.

Genetic models based on the HPA axis

In summation, MDD is a multifactorial disease that is caused by multiple genes and environmental factors, so a single gene deletion or overexpression cannot reproduce all the core symptoms of depression. In addition, due to the high cost of modeling, such gene editing models are limited in clinical application.

Please contact us so that our Model Design Specialists may promptly project needs. Alternatively, you can always email service-apac@cyagen.com to inquire about our services or obtain a quote for your project.

What Are The Key Points Of CAR T Cell Therapy?
Research Progress of CAR T Therapy in Solid Tumor Treatment
Cystic Fibrosis and the CFTR Gene
CAR T Cell Therapy Review: Challenges in Solid Tumor Research
We use cookies to ensure that we give you the best experience on our website. To learn about how we keep your information safe, view our Privacy Policy. OK Privacy policy