What You Need to Know about Glaucoma

Glaucoma is a group of eye diseases that damage the optic nerve, many types of which have no warning signs. The effects of the disease appear gradually as fluid builds up in the eye, so the patient may not notice changes in vision until the disease is advanced. The health of the optic nerve is critical to maintaining good vision. Because vision loss caused by glaucoma is irreversible, it is important to have regular eye exams, including measuring intraocular pressure (IOP), so patients can be diagnosed early and begin treatment.

As the second leading cause of blindness globally, glaucoma can occur without an exact cause due to the numerous factors affecting its pathology. There are several animal models used to research the various pathological factors of glaucomas and also demonstrated the potential efficacy of targeted glaucoma gene therapy. How much do you really know about glaucoma?

Glaucoma is a group of diseases characterized by atrophy and depression of the optic disc, visual field defect, and decreased visual acuity. The pathological IOP and optic nerve ischemia are the risk factors for primary glaucoma. In addition, the tolerance of the optic nerve to pressure and damage is also related to the occurrence and development of glaucoma. Any blockage in any part of the aqueous humor circulation of the human eye can lead to increased IOP and glaucoma.

Glaucoma is the second leading cause of blindness in the world, with an incidence of 1% of the general population and 2% of people over the age of 45. Clinically, glaucoma is divided into three categories — primary, secondary, and congenital — according to the etiology, anterior chamber angle, IOP, and other conditions.

The underlying cause of primary angle closure glaucoma is mainly pupillary block, while in secondary forms there are other underlying causes that either push or pull the iris to contact trabecular meshwork, a critical determinant of IOP values. Secondary glaucoma is caused by certain ocular or systemic diseases that interfere with normal aqueous humor circulation, such as traumatic glaucoma, neovascular glaucoma,  iridocyclitis-associated secondary glaucoma, and glucocorticoid-induced glaucoma. The causes of the above-mentioned ocular diseases are relatively clear. Congenital glaucoma is caused by abnormal embryonic development and congenital anterior chamber angle structural variation. Primary congenital glaucoma (PCG) is a rare disease caused by genetically-determined abnormalities in the anterior chamber angle and trabecular meshwork resulting in elevated IOP.

Association of Disease Symptoms with Pathogenesis

Neovascular glaucoma (NVG) refers to glaucoma caused by the formation of new fibrovascular membranes on the surface of the iris and trabeculae, leading to the adhesion of the peripheral anterior iris and hindering the drainage of aqueous humor. It is refractory glaucoma secondary to extensive retinal ischemia (eg, retinal vein occlusion, diabetic retinopathy). NVG is irreversible, with a high risk of blindness and long-term eye and head pain [1].

Primary open-angle glaucoma (POAG) is an irreversible blinding disease mainly manifested by optic nerve damage and visual field defects. The essence is retinal ganglion cell (RGC) damage. The mechanistic theory believes that the cause of the disease is that the IOP rises beyond the tolerable limit of the optic nerve, which changes the structure of the optic nerve lamina cribrosa, thereby causing mechanical damage to the nerve fibers. Further research has shown that because the optic nerve axoplasmic transport was blocked in the optic nerve lamina cribrosa, the axonal membrane was unable to use mitochondria to generate ATPase, and the axonal protein synthesis and transport were reduced due to metabolic problems, resulting in impaired cell function and spontaneous apoptosis. The vascular theory believes that ischemia caused by vasospasm is the main reason for the pathogenesis of POAG [3].

Spontaneous animal models of  glaucoma include spontaneously (inherited) or artificially genetically modified (transgenic) lines which develop the disease characteristics without external induction; they are of great value for preclinical in vivo studies of glaucoma. Herein, we discuss three such spontaneous mouse models of glaucoma, their clinical phenotype, and research applications.

The DBA/2J mouse is one of the most informative mouse models since it shares many similarities with human glaucoma. As an age-dependent model of hereditary ocular hypertension, it is widely used in glaucoma research. This model has typical features of glaucoma injury, with spontaneous anterior segment abnormalities (anterior chamber deepening, corneal edema, etc.), iris atrophy, peripheral iris adhesions, and pigment dispersion, resulting in elevated IOP from about 8 months of age. It should be noted, however, that the extent of RGC damage varies greatly between individuals.

A study has reported that DBA/2J/Pax6-Norrin mice, obtained by crossing transgenic mice (Pax6-Norrin) that overexpress Norrin in the retina with DBA/2J mice, have a significantly higher survival rate of optic nerve axons in the 1-year-old group than that in the littermate DBA/2J group. The study provides a possible new target for glaucoma treatment involving Norrin. The main advantage of transgenic animal models of glaucoma is the small inter-individual variability in responses to elevated IOP, retinal and optic nerve damage. More importantly, the application of transgenic animal models helps to identify interactions between disease-causing loci.[4]

In addition to spontaneous genetically modified animal models, induced animal models are also used in the study of glaucoma. The specific induction methods can be roughly divided into six types according to the methodology: injection of specific substances into the anterior chamber; steroid induction; laser photocoagulation of the aqueous humor outflow channel; laser, cautery, or ligation of the episcleral vein; circumlimbal suture[4].

In recent years, the underlying genetic factors of numerous eye diseases have been identified and the development of related animal models has contributed to major breakthroughs in preclinical research. Gene therapy is increasingly being used in the targeted therapy of eye diseases, including glaucoma.

The authors reduced IOP by disrupting aquaporin 1 (Aqp1) in the ciliary body using AAV-delivered CRISPR-Cas9. Aquaporins are a family of water-transporting transmembrane proteins that are widely expressed in humans. Transgenic mice lacking Aqp1 have been shown to have lower IOP due to reduced aqueous humor formation and inflow.[5]

Figure 5. Aquaporin 1 Is Expressed in the Mouse Ciliary Body and Can Be Targeted Using CRISPR-SaCas9 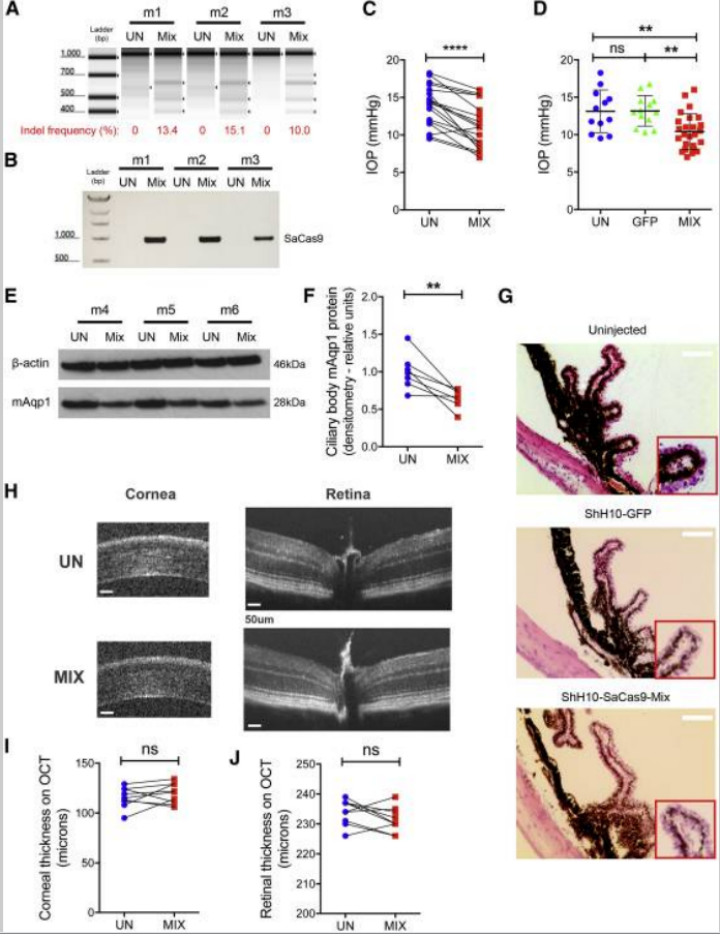 Genetic Factors of Eye Disease: Retinitis Pigmentosa (RP) & the RHO Gene
Maternally Inherited Disorders: Leber Hereditary Optic Neuropathy (LHON)
Two “Weapons” Against Diabetic Retinopathy
Preclinical Study of Diabetic Retinopathy
We use cookies to ensure that we give you the best experience on our website. To learn about how we keep your information safe, view our Privacy Policy. OK Privacy policy